Sorry Rush, President Obama Is Successful....Successfully Ruining The Republic As We Know It.

I received the video below this morning in an email from a friend who routinely forwards jokes. To him this is just a video about the state of the US Job market-- just a joke. In his mind President Obama is more than capable of turning everything around and he is confident that the economy and job market are going to recover because finally we have a "capable" POTUS (his words not mine):

"Eventually a consulting house to multinational corporations agreed to hire me as a research assistant. Like a spy behind enemy lines, I arrived at my mid-Manhattan office and sat at my computer terminal..."

Only a mere 8% of Obama's cabinet appointments have private sector experience. Why, because Obama and his minions believe that the government is the answer to all societal woes. He believes that government should house, feed, provide health care and CONTROL society. However, I cannot think of a single problem that has been effectively solved by government -- without creating an even bigger problem in the process.

Bill Burch, chairman of GRIT (the Grass Roots Institute of Texas) wrote that "we need to understand the thinking of the new Marxist Democrats and how they differ from the past. First, as a basis for their thinking, they believe "from each according to his ability and to each according to his need (Karl Marx, 1875)." We also need to understand the difference between a Marxist Democrat and a liberal Democrat." He continues, "a liberal Democrat believes that the government is responsible for helping each individual achieve his goals and freedoms. The Marxist Democrat believes that the individual is responsible to society as a whole and to help government achieve its goals." Do you recall President Elect Obama advising that our "individual salvation depends on our collective salvation"? We are not dealing with your run of the mill liberal democrat anymore in fact at this point I'd welcome a liberal democrat. What we have on our hands now (thanks to the hopeful, the uniformed, and the just plain stupid) is a Marxist who despises America and seeks to "fundamentally transform it".

Posted by Conservative Black Woman at 10:53 AM 64 comments:

Fox finally put up the last segment of the show (my 2.5 minutes of fame...lol)

National Health Care Is A Trick. Will You Be Duped?

Denmark Versey, self described blackest man on the internet wrote National Health Care Is A Trick. The Slaves of The Modern Era Will Be Bound Not With Chains But With Pills & Debt (Redux) and deconstructs how and why some people (especially Ohama sychophants) are so easily duped. What a clever guy..... 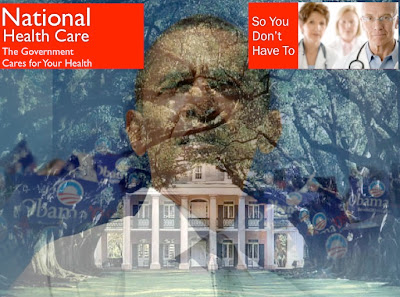 After the Emancipation Proclamation, only a handful of freed slaves immediately separated themselves from their former masters. Lacking either the resources or will to be free, the vast majority elected not to leave the security and safety of the plantation.

These partially emancipated slaves (sharecroppers) transitioned to a new economic and political reality, that bound them to the land, made them politically impotent, and kept them in perpetual debt. Stuck in the matrix of a simultaneously adversarial yet completely dependent relationship with the Plantation, these people became the first Plantation Negros.

The Plantation Negro reasoned, at least he could eat, even though he was not free. They were fed a diet designed to keep them alive, while costing the plantation as little as possible. However, early plantation negros were resilient and resourceful. They were able to supplement their diets with organic vegetables and naturally raised animals.

As the summer of the agrarian era evolved into a cold industrial winter, Plantation Negros developed relationships with the Factory. In exchange for safety and security, the Factory ensured the Plantation Negro a home. However, he remained politically impotent and as he was integrated into the culture of consumption, he became increasingly in debt. 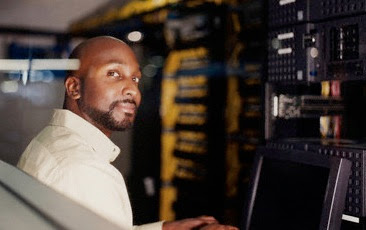 Although he remained politically impotent and in insurmountable debt the Plantation Negro reasoned he could at least get Health Care. 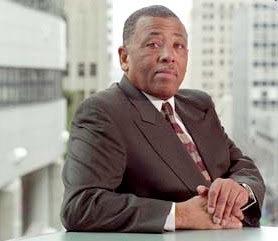 As the bubble of the Digital era pops, the Plantation Negro finds himself wading in the tumultuous waters of economic upheaval, social collapse and an impending tsunami of disease. The Plantation that became the Factory which became the Corporation is now masquerading as the Government.

In exchange for safety and security, the Government provides housing by insuring mortgages, it finances debt and educates children. As an extension of its patronage, the Corpaorate / Government will continue to feed Plantation Negros an increasingly toxic diet of genetically modified food and prescription drugs, that not only makes them sick, but appears to sterilize the Plantation Population as well.

This year the Plantation / Factory / Corporate / Government is introducing a new product. It is called National (Plantation) Health Care. Sadly Plantation Negros think the same people who poisoned them are actually offering an antidote." 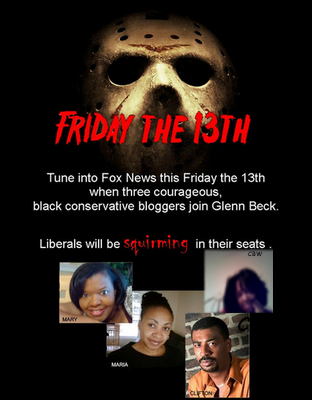 Glenn Beck has invited Black Conservatives to a taping of his show on tomorrow November 12th which will air on Friday the 13th. The title of the show is "Time To Be Heard"...well, I'll say! I'm very excited to meet all of the bloggers that I so admire. Gary at A Time For Choosing posted this picture on his blog (but he didn't include me, so I included myself...lol) titled "Glen Beck's Friday 13th Nightmare For Liberals Across America: Beck Hosts Prominent Black Conservatives"

Good looking out Gary! Thanks for spreading the word.

Perhaps I can replace Prof. Mark Lamont Hill. At least I'm a REAL conservative. Maybe I'll be able to convince Glenn with put in a word for me with his bosses at Fox...lol.
Posted by Conservative Black Woman at 11:52 PM 45 comments:

Communism Is The Religion Of the Godless

The basic concept of Communism is that the idea of God is irrelevant and only to be "tolerated" as an accommodation to those of "low mentality". That explains the contempt that the Left has for Christians or right-wing nuts as we are routinely described. It explains the elitist mentality of our Communist-in-Chief, who had the unmitigated gall to say that America is not a Christian nation. Communism and communist deny the existence of any form of deity, believing that only matter in motion is eternal and the only divinity is a directive force inherent in matter which is why they worship the Earth. These Leftist worship the "created things" rather than the Creator.

Yes, I maintain that communism is the religion of the Godless and it even has it's own plan of salvation which is Utopia. The Communist vainly believes that he'll transform the heart of man by providing for all of man's material needs for him. Think back to October 31, 2008 when then President Elect Barack Obama proclaimed before an enthusiastic congregation crowd "We are five days away from fundamentally transforming America". Which read to the sychophantic drones as "our help" "our saviour" has come.

Communist even have a doctrine of conversion...indoctrinate the youth. In fact our colleges and universities are veritable alters of conversion. I can tell you that for me that was the case as an undergraduate. I was Godless and wanted and in point of fact sought out righteousness, goodness and justice as long as no diety was involved. Communism was perfect.

Communists also have a standard of consecration, and self-discipline. It was Lenin who said, "Few and better." and "We won't accept into membership anybody with any reservations whatsoever. We won't accept into our membership anyone unless he is an active, disciplined, working member in one of our organizations." Now remember Michelle Obama saying "Barack will require you to work". Have you noticed how the state run media has begun to call Americans "workers"?

It's a shame that drones are so busy protecting and defending the "first black president" that they are complete oblivious to the forces at play in our nation.
Posted by Conservative Black Woman at 10:58 AM 28 comments:

What is a Communist?

Don't let the title of this blog deceive you. Yes, I'm a Conservative Black Woman -- Not to be confused with Republican Black Woman. At this point I am in fact a Political Atheist. I believe with every fiber of my being that America is no longer a Constitutional Republic but rather a Corporate Fascist Oligarchy. Our Presidents are just the puppets, tools, spokespersons for the Powers that Be...Council of Foreign Relations and various other NGO's who are beholden to the International Banking Cabal. No, I'm not a Conspiracy Theorist -- I am a Conspiracy Researcher and I'd advise you to do the same. Who said "I would not have you ignorant?" Yes, that's my "handler" for all of those who think I have one. Over the course of writing this blog. My paradigm has shifted ENTIRELY. Yes, the paragraph below still applies but the Left\Right, Democrat\Republican head fake no longer applies to me. I WOKE UP!!!!

"I am fed up with what has happening within the black community. Too many of our families are broken, too many of us are morally degenerate and too many of us are willing to blame all of our pathology on slavery, George Bush, the Republican party or anything but our failures as Parents, Husbands, Wives and Christians."

Truth is scarcely found. But integrity and truth are hardly found within the Black population as a whole at least not where it involves black people. Most blacks have pledged allegiance to their blackness, not truth, not to America, not even to God as many profess. Integrity and truth has to go out the window if it somehow poses a threat to the "positive" image of blackness. ~Anonymous

Regarding Obama's hit on Gadhafi's family: "He's spineless and shameless, except when his masters unleash him on people of color. Then he becomes a pit bull--a real life Sambo/Quimbo doing the dirty work of Simon Legree. TPTB knew exactly what they were doing when they "selected" Obama to manage their psychopathocracy." ~ Makheru Bradley

"Whenever I hear cats start talking that "community" shit I know they are not serious. No one is accountable in conversations about "da community". That "we as a people"... Plantation Negro segmentation nonsense is Kool-Aid left over from the 70's. It perpetuates the illusion that there is even such a thing as a "black community". There aint no "community" and hasn't been in 40 years. Most Negros don't even know their neighbors."The only effective group is FAMILY. Families are the cells of a society. Destruction of the cell is cancer. An effective institution, expectation and habit of marriage is the antidote." ~Denmark Vesey(A Bloggin' Beast!!!!)


The irony of having an economic system that you hate be the source of your entitlement that is in excess of your productive capacity. -- Constructive Feedback (Blogger Extraordinaire)

Most people can't think, most of the remainder won't think, the small fraction who do think mostly can't do it very well. The extremely tiny fraction who think regularly, accurately, creatively, and without self-delusion – in the long run, these are the only people who count. -Robert A. Heinlein

With all due respect to this great I am not sure that he could have imagined the day where:

In this environment - Robbery, the oppression of intimidation, and degradation put in the form of a music genre lead to an inevitable condition of insecurity for persons and property.

I collect with Vodpod. Watch more of my videos